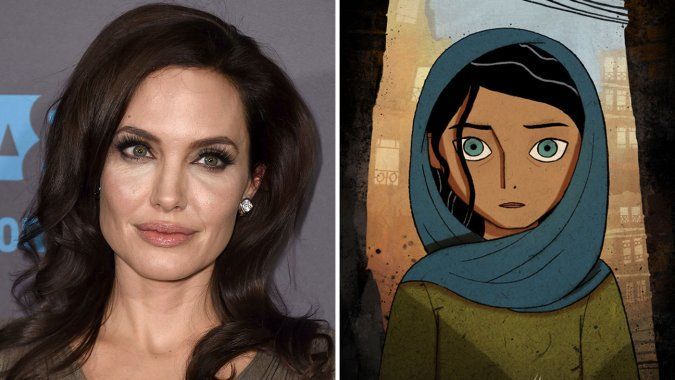 The adaptation of Deborah Ellis' young adult novel centers on a young girl living under the Taliban regime in Afghanistan.

Angelina Jolie Pitt has signed on to executive produce the animated film The Breadwinner, which centers on a young girl living under the Taliban regime in Afghanistan.

The film is an adaptation of Deborah Ellis' young adult novel, and will be directed by Nora Twomey from a screen story by Ellis and screenplay by Anita Doron.

The story centers on Parvana, who disguises herself as a boy to become the breadwinner of the family when her father is unfairly imprisoned. The Breadwinner also showcases culture, history and beauty of Afghanistan. A version of the film will be produced in Dari in addition to the English-language version.

"Millions of young girls like Parvana are growing up today under oppression or conflict, and helping their families to survive in those conditions. This story is a reminder of the immense value of their contribution," Jolie Pitt said in a statement. "I am delighted to be working with a talented team of artists who I know will do justice to the richness, creativity and strength of Afghan culture and to little girls like Parvana."

The project is slated to begin production in August, and due for completion in early 2017.

Jolie Pitt is currently is currerntly working on the Cambodia-set First They Killed My Father, which she is directing for Netflix. He latest film, By The Sea, a drama she wrote, directed and stars in with Brad Pitt, will be released by Universal this November. She previously presented and served as an executive producer of the Ethiopian film Difret, which premiered at the 2014 Sundance Film Festival.
You must log in or register to reply here.
Similar threads
Angelina Jolie Reveals Sons Pax, Maddox's New Jobs
Mahesh Bhatt compares Esha Gupta to Angelina Jolie
Angelina to quit acting?
Angelina Jolie: Pass the Salt
Angelina Jolie will have a Bosnian Christmas gift
Share:
Facebook Twitter Pinterest WhatsApp Link
Top