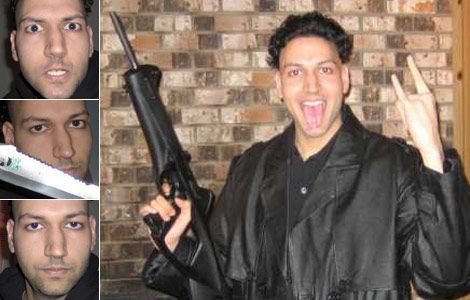 The man responsible for a shooting rampage at a Montreal college which left one student dead and 19 others injured preferred Coke over Pepsi, missed being young and wanted to die "like Romeo and Juliet -or- In a hail of gunfire".
Police have named the gunman as Kimveer Gill, a 25-year-old from Montreal who called himself the "angel of death" and left menacing-looking photos of himself dressed in a black, leather trenchcoat brandishing guns and knives on a gothic website called vampirefreaks.com.
Gill, who was shot dead by police during yesterday's rampage, had an online profile on the website under the name "fatality666".
"His name is Kimveer. You will come to know him as Trench. He is male. He is 25 years of age. He lives in Quebec. He finds that it is an O.K place to live. He is not a people person. He has met a handfull [sic] of people in his life who are decent. But he finds the vast majority to be worthless, no good, kniving, betraying, lieing [sic], deceptive, motherf---ers," he wrote.
Work sucks..........School sucks..........Life sucks..........What else can I say. Metal and Goth kick ass. Life is like a video game, you gotta die sometime."
An image of a headstone appears further down the page of his profile. The epitaph disturbingly reads: "Kimveer, lived fast, died young, left a mangled corpse."
In a survey he has posted on his profile, Gill said that he likes Coke more than Pepsi, his weakness is his "laziness", his most missed memory is "being young", he likes thunderstorms and he has been in love before.
To the question, 'How do you like to die?' Gill responded: "Like Romeo and Juliet -or- In a hail of gunfire".
His dislikes are: "THE WORLD AND EVERYTHING IN IT. But to be more specific: People who pretend to be your friend, but they're not, Country Music, Hip Hop, Posers, Wiggers, Chavs, Jocks, Preps, Normal people."
The vampirefreaks.com website has condemned the attacks and distanced itself from the killer.
"Just because someone goes around shooting people and happens to be a member of vampirefreaks, doesn't mean that this website has influenced him to do such a horrible thing," a statement by Jet says on the site's homepage.
"The goth scene is a very friendly, nurturing, non-violent community and we are very supportive of our users and do not condone any illegal activities."
Jet offers his condolences to the victims of the shooting, describing it as "a tragic event".
"In fact I believe we are more mature and responsible than other scenes, in that we value intelligence, part of goth culture is thinking for yourself and being more aware of the world, rather than just following the mainstream trends."
"Don't let a few bad seeds ruin our reputation, we are a great community."
source: http://www.smh.com.au/news/world/angel-of-deaths-web-warnings/2006/09/15/1157827122312.html
S

gothism nd all dat shuld be dun away wid

that it won't happen again

its just so SAD ... i mean if 1 of my close ones died just bcuz of sum1z firing .. nd then he dies himself too id go MAD just for revenge bt he's no longer alive

jaY said:
its just so SAD ... i mean if 1 of my close ones died just bcuz of sum1z firing .. nd then he dies himself too id go MAD just for revenge bt he's no longer alive