Honda has just unveiled the much awaited all-new City in a global reveal in New Delhi. The fourth-generation car is bigger, sleeker and sharper looking than its predecessor but it’s more of an evolution than a revolution. The new Honda City follows its ‘Exciting H’ design language which is to be carried over to other Honda models as well.

The front still retains the ‘arrow-head’ shape of the earlier car but has a more prominent grille, twin-barrel headlights and a sharper bumper.

The sides of the car have strong character lines running through the doors whilst the rear tail-lamps which extend into the boot lid of the car, accentuates the 1695mm width of the car. In fact, carmaker claims the new Honda City is the widest car in its class which is quite believable when you get into the car. Legroom is particularly spacious thanks to the increased wheelbase (up by 50mm to 2600mm) and the flat floor only adds to the sense of space and comfort. Rear seat passengers are further pampered with a rear air-con vent, a first on a City. 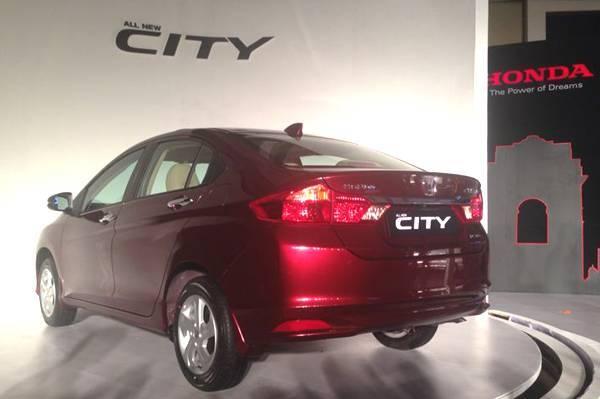 The new 2014 Honda City is loaded with equipment like never before. You get a large, five inch multi-function screen takes care of all the audio functions but the talking point is a unique touch panel for the all the aircon controls which is easy to use and looks pretty high-tech and upmarket.

The 8-speaker sound system is supported with USB, aux-in inputs and unlike the previous City Honda has caved heeded to customer feedback and given a CD player. Another unique feature are four power output sockets to keep to full house of battery munching smart phones topped up. Other features include; a start/stop button, sunroof, cruise control and a rear view camera with different

The all-new interiors feel much more upmarket than before with richer plastics, a piano black finish on the top bit of the instrument panel and sturdy vents that sit right at the top of the dash. The chunky steering wheel feels great to hold and the mesh finish on one of the spokes is a cue taken from the Honda Civic.

The driving position, like most Hondas, is spot on with the stubby, leather clad gearlever falling nicely to hand. The dashboard cowl, however, is higher than before which will make short drivers make full use of the seat height adjust function. 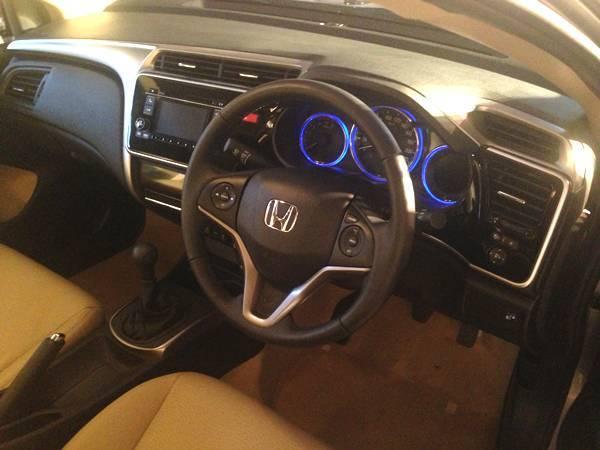 The new Honda City will be powered by the familiar 1.5 litre i-VTEC engine from the previous City but this latest version has been tuned for further efficiency. The big news, however, is the addition of a diesel engine in the City, which is essentially the same 1.5 i-DTEC motor from the Amaze. Honda has concentrated on fuel efficiency over performance and the Honda City diesel is expected to return best-in-class fuel economy, no doubt aided by the disappointingly skinny 175/65 R15 tyres.

The new Honda City is expected to go on sale in January 2014 and is likely to cost between Rs. 8.3 lakh for the base petrol model to Rs. 11.6 lakh for the top-end diesel.
​
You must log in or register to reply here.
Similar threads