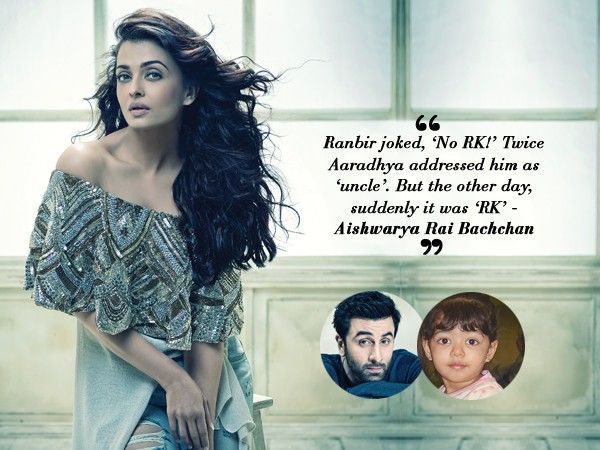 The scorching hot pictures of Ranbir Kapoor and Aishwarya Rai Bachchan’s Filmfare shoot are literally breaking the internet right now. But that’s not it, you guys.

Their interviews too are going viral. Here’s an excerpt from Editor, Jitesh Pillaai’s candid conversation with Aishwarya Rai Bachchan:

Ranbir mentioned to Filmfare that ‘Ash was a huge star during Aa Ab Laut Chale…but never did she once patronise me’...

Yes, he was like a buddy on the set of Aa Ab Laut Chalein. Akshaye (Khanna) was also my buddy but he was in and out. He’s a sweetie but he has his own moods. But Ranbir and I’ve enjoyed a friendship, which continues till date. The sweetest thing happened just the other day. We were shooting and when I FaceTimed Aaradhya, she gave Ranbir that smile. She knows him well. One day she just ran into his arms. Because he was wearing this jacket and cap like AB (Abhishek Bachchan) and he had the stubble. Thinking he’s AB, she hugged him and he was like ‘Awww’. Hiroo aunty (Johar) said, ‘Ranbir you’re a charmer’. But I understood what had happened. I asked her you thought he was Papa and she said ‘Yaaa’. Since that day she’s become a bit shy around him. Abhishek also teased Ranbir, ‘Hmmm… this one is crushing’. I told Ranbir this is so funny.

I was nuts about your father and you’re the first one Aaradhya is reacting to as an actor with that shy expression. Life’s coming full circle. She likes the Tamasha song Matargashti. We did the steps of the song for her fourth birthday. On the set, I introduced Ranbir as ‘Ranbir uncle’ to her. He joked, ‘No RK!’ Twice she addressed him as ‘uncle’. But the other day, suddenly it was ‘RK’. We all laughed at that.
N