After 27 yrs, don Rajan back to face trial 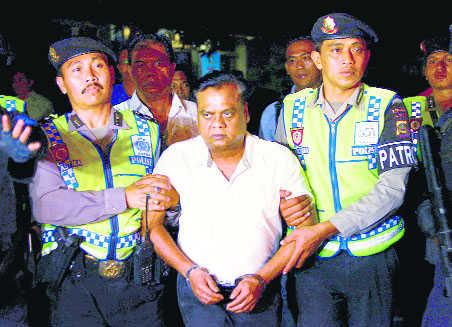 Underworld don Chhota Rajan was brought here early today from the Indonesian tourist city of Bali to face trial in over 70 cases of murder, extortion and drug smuggling in Delhi and Mumbai.
Deported after being on the run for 27 years, the 55-year-old gangster, whose real name is Rajendra Sadashiv Nikalje, landed at Palam airport along with seven-member team which included officers from the Delhi Police's elite Special Cell and Mumbai police’s Crime Branch in an IAF's Gulfstream-III aircraft.
He was taken straight to the CBI headquarters where he was subjected to a preliminary round of questioning.
Due to security concerns, Rajan, who has reportedly tipped Indian security agencies about the movement of Dawood Ibrahim and his aides, is unlikely to be taken to a Delhi court and instead a magistrate will be brought to the CBI headquarters for his remand.
After his arrest in Bali on October 25, India had pressed for his early deportation, which, however, got delayed due to closure of Bali's international airport after volcanic activity in a nearby mountain.
Upon his arrival here, he was taken into preventive custody of Interpol division of the CBI till the central probe agency completes legal formalities for registering a case of allegedly procuring fake passport and takes over the 70 cases handed over by the Maharashtra Government.
Official cars with flashing lights accompanied by heavy-armed escort vans were seen leaving the Palam Technical Area at around 5:30 am, as anxious camera persons and photographers made unsuccessful attempts to get a glimpse of the underworld don, who was believed to be in one of those vehicles with tinted glasses.
There was high drama as the CBI anticipating a large media presence first used two convoys, one being a decoy, to ward them off. As the cameramen started following these two convoys, a third carcade moved out of the airport from another gate and entered the CBI headquarters, away from the media glare.
In a brief statement, CBI spokesperson said Rajan had been successfully brought to India from Indonesia. "He is in custody of CBI-Interpol. Legal formalities are in progress."
You must log in or register to reply here.
Similar threads
Soumya rape-murder: SC drops murder charge, changes death sentence to 7 yrs jail
Canada: Married for 62 yrs, couple cries after being separated in care homes
Egyptian hijacked plane to see wife after 24 yrs, shows ‘victory’ sign
Slugfest on 10 yrs of rural job scheme
5 yrs on, no trace of 11 youths missing in Mexico
Share:
Facebook Twitter Pinterest WhatsApp Link
Top