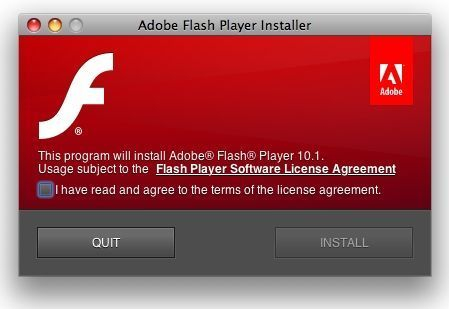 Adobe updates Flash Player for Mac with H.264 GPU decoding
​
Adobe has added support for GPU video decoding to the latest version of Flash Player 10.1 for Mac. That means Mac users no longer have to grab a beta version of Adobe Flash in order to see the benefits of GPU acceleration. The upshot is that Mac users should notice that it takes significantly less CPU power to decode Flash content, especially HD videos.

The update only supports Mac OS X Snow Leopard, and the only video cards supported are the NVIDIA GeForce 9400M, GeForce 320M, and GeForce GT 330UM. While you might think that would leave hackintosh builders out in the cold, the GeForce 9400M graphics card is basically the same one used in Windows noteboks with NVIDIA ION graphics.

In other words, this update could bring hardware video acceleration to machines such as the Asus Eee PC 1201N and HP Mini 311. That could be a huge benefit, since it means HD Flash video, which is difficult to decode on a low power system with an Intel Atom processor, could now be viewable on some Atom-powered notebooks running OS X. Of course, the latest version of Flash for Windows has supported hardware acceleration for a while, so it’s not like you need to run OS X to watch HD Flash video on these notebooks.

You can download the latest version of Flash at get.adobe.com/flashplayer.
Last edited: Dec 9, 2020

Adobe Flash Player gets its last update, as support ends this year

Adobe has released the last scheduled update for its Flash Player, over three years after it announced plans to phase out the plugin. Adobe Flash Player will no longer be supported after this year.

Adobe Flash Player is set for discontinuation within hours

Adobe Flash Player will lose support from January 1 and will no longer be available for download. The browser plugin has greatly declined in importance in the last few years as HTML5 was adopted.