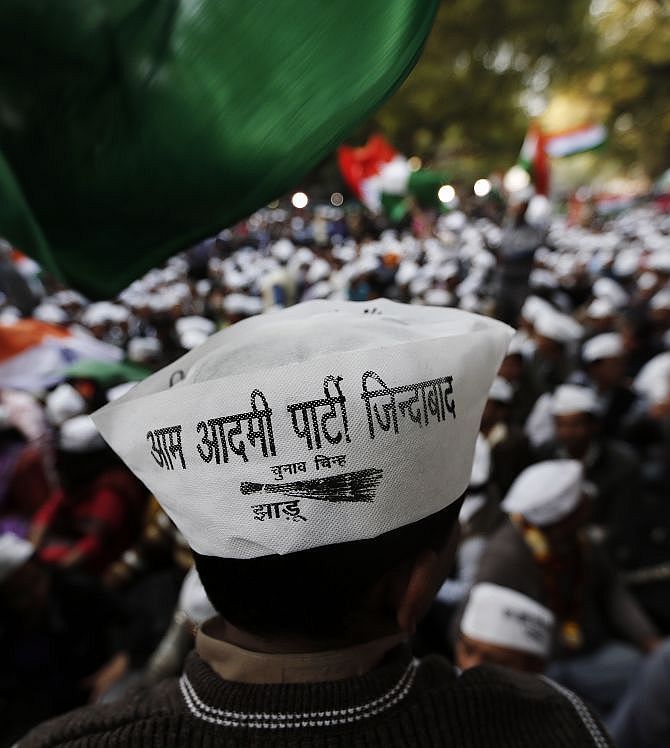 Two persons said to be members of the United Kingdom arm of the Aam Aadmi Party are embroiled in a student visa scam in Britain uncovered by the BBC.

An undercover operation by the BBC programme ‘Panorama’ showed purported AAP worker Varinder Bajarh, also director of Studentway Education, telling a student how she can get a compulsory English language certificate required for her visa without actually giving the exam.

Another purported AAP UK member Hemant Kumar, referred to as a former director of Studentway, was shown handing over a fake academic qualifications in a seal envelope to a student who worked with the producers of the programme.

However, the UK arm of the AAP said it was not aware of these two persons being members of the party.

"The photo will be yours," Bajarh was seen telling the student in the ‘Panorama’ programme which aired on Tuesday. The student was then sent to Eden College International in London for a fake exam.

While Bajarh told the BBC programme that his agency is "a respected organisation" and said the men filmed were never employees but may have used the office without his knowledge, the UK arm of the AAP seems to have been caught unawares.

"I am not aware of them as AAP UK members but I will have to look into this," said Vikas Wahi of the party's British chapter.

The Overseas Friends of the Bharatiya Janata Party claimed that Bajarh and Kumar are members of the AAP in the UK and produced what it said were images from the party's website, aamaadmiparty-uk.org, as proof.

An OFBJP spokesperson condemned the "corrupt practices" and asked AAP leaders Arvind Kejriwal and Prashant Bhushan to "practice what they preach".

However, a screen grab from the AAP website which shows Bajarh as a key team member of the UK chapter of the AAP is now conspicuously missing.

The BBC investigation revealed that some students who wanted to stay in the UK but were not qualified to pass the immigration test were replaced by impersonators who took the tests and appeared in interviews on their behalf.

The BBC's ‘Panorama’ programme said the tests are run by English Testing Service, one of the world's biggest English language testing companies.

A home office statement said, "We have taken action and suspended the two colleges identified in the programme.”

"Applications made by students in the UK using the English testing service or associated with the colleges or immigration advisors mentioned in the programme have been put on hold pending the outcome of those investigations. All further English language tests done through ETS in the UK have been suspended."
You must log in or register to reply here.
Similar threads