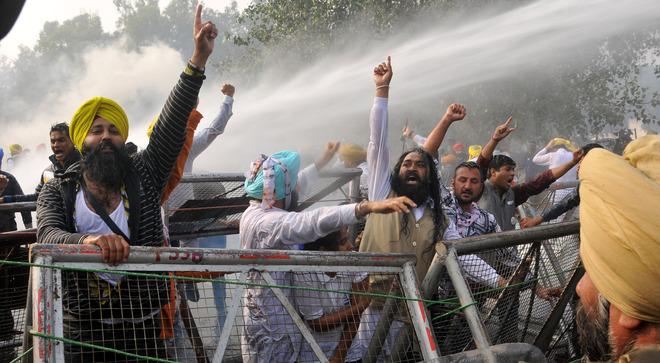 The local police today used teargas and water cannons and even resorted to mild lathicharge to disperse Aam Aadmi Party activists who were protesting against the Akali government near YPS Chowk.
Around 10 activists, including AAP women wing convener Baljinder Kaur and a woman journalist of a vernacular daily, were injured in the melee. Another party activist Mohammad Sadiq from Malerkotla was injured after being hit by a teargas shell.
The activists, who wanted to hold a protest in from of the Chief Minister’s residence in Chandigarh, were demanding suspension of the Agriculture Minister Tota Singh, alleging his involvement in corrupt practices. The protest was led by AAP youth wing convener Harjot Singh Bains.
The protesters gathered in large numbers in front of Gurdwara Amb Sahib here. When they started their march towards Chandigarh, the Mohali and Chandigarh police stopped them near YPS chowk where they squatted on the road. The ruckus started when they tried to break the police barricade.
The police used teargas and water cannons to stop the protesters from entering Chandigarh.
Bains alleged they had demanded the suspension of Tota Singh for his involvement in various scams. “He has no right to be the minister. Due to the faulty policies of the state government, the farmers are facing the worst times,” alleged Bains.
You must log in or register to reply here.
Similar threads