The political feuding over the CBI raid on Rajendra Kumar, principal secretary to chief minister Arvind Kejriwal, became fiercer on Wednesday with Congress leaping into the fray and demanding - along with the Aam Aadmi Party - the resignation of finance minister Arun Jaitley for alleged irregularities at the Delhi and Districts Cricket Association (DDCA).

Kejriwal had alleged on Tuesday that the CBI had raided his office to subvert an investigation into a "DDCA scam". Though the CBI denied entering Kejriwal's office, the CM reiterated his claims on Wednesday even as Congress aggressively targeted BJP and Jaitley, demanding he quit as finance minister to facilitate a fair probe.

Delhi Congress chief Ajay Maken, with senior leaders Ghulam Nabi Azad and Mallikarjun Kharge by his side, said he was demanding Jaitley's resignation and a probe by a joint parliamentary committee on the basis of the report of a three-member committee set up by Kejriwal, a Registrar of Companies report last year and the findings of a two-member commission constituted by the Delhi High Court as well as a fact-finding panel of the DDCA.

He said findings of a two-member commission set up by the Tees Hazari courts revealed lack of transparency at DDCA with its members illegally running private academies and minting money. The commission was, however, denied relevant documents relating to the DDCA brass during Jaitley's tenure as president from 1999 to 2013. 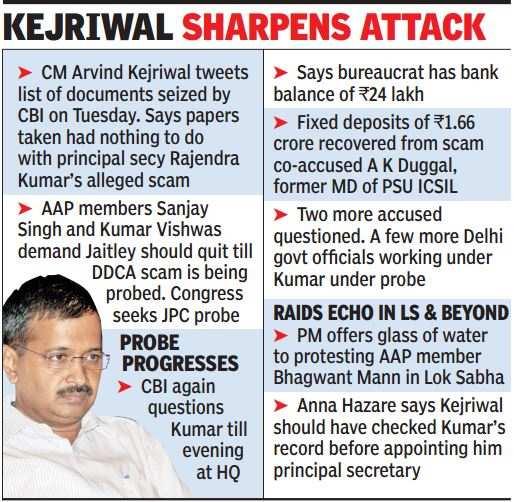 Jaitley hit back at AAP and Congress, saying, "If they tell me what is the specific issue, I can answer it, but I can't answer vague allegations without any basis. Secondly, a state government and a party, which is in the dock for having supported corruption, and having interfered in an investigation in this manner, can't really deflect the issue without any basis."

The day saw a keen tussle between Congress and Kejriwal to demand Jaitley's resignation. Soon after the Congress press meet got over where it demanded that the finance minister quit over malpractices in DDCA, Kejriwal announced that he would hold a press conference on Thursday to expose Jaitley's role and other aspects of the case.

Trinamool Congress, too, joined, saying it was the first to ask for a JPC on DDCA on Wednesday morning. "Now, media says that Congress and AAP have demanded the same. We welcome that," the party said.

The political element was evident with Maken accusing the AAP government of dragging its feet over DDCA as it did not act on a detailed report of a committee set up by Kejriwal that submitted its findings on November 17. He challenged the city government to demonstrate its intent by taking concrete steps against alleged corruption at the DDCA, saying to date no FIR had been registered and nor were the courts approached.

Kejriwal claimed CBI's seizure report gave credence to his claim that the raid actually targeted him. "Documents seized from my office. No relation to allegations being probed. Item 7 -- file movement register of last one month. CBI kept reading DDCA file in my office. They would have seized it. But after my media briefing, they left it. Not clear if they took a copy," he tweeted. Claiming to have been on the verge of constituting an inquiry commission, he said the CBI was seeking a damning report on DDCA.

"Congress demands that pending the completion of inquiry through a JPC, Arun Jaitley step down, failing which the prime minister should sack him," Maken said. He added that four persons in DDCA, "known for their proximity" to Jaitley, were named as "officers in default" by the Registrar of Companies in August last year.

Responding to Congress's allegation that reconstruction of Ferozeshah Kotla Stadium, carried out between 2002 and 2007, saw an escalation of cost by Rs 90 crore, BJP sources said the final budget of Rs 114 crore was much less than what was spent on refurbishing Shivaji Stadium and the JLN Stadium for the Commonwealth Games. Rs 900 crore was spent on JLN and Rs 600 crore on Shivaji Stadium. Despite massive expenditure, some stadia were still not ready for the Games.