A management grad who stole luxury cars from five-star hotels 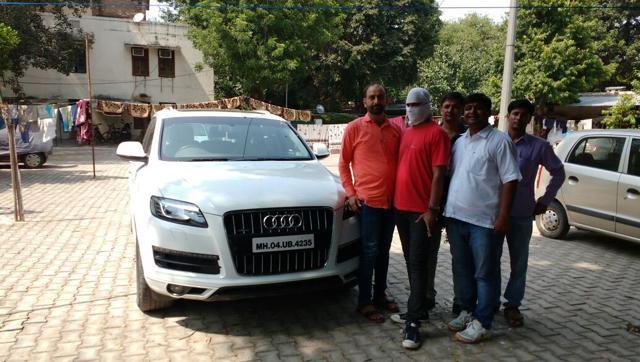 Dressed in a branded suit and shiny shoes, his hair gelled, he looked like an affluent businessman. He would confidently walk in any five-star hotel, pretending to talk over the phone in fluent English, reach the valet counter and pick up any car key he found, as if it was his.
He would reach the driveway and drive away with the car. The guards at the valet counter never dared to stop him.
The man, Satendra Singh Shekhawat (35), an MBA in marketing, allegedly stole over 20 luxury cars including Audis, Mercedes’ and BMWs from different hotels using the same modus operandi. He finally landed in the police’s net on Tuesday and the police recovered an Audi Q7 he stole from Hotel Holiday Inn from him.
Shekhawat had reportedly earlier been arrested thrice and had served punishment in jails of Madhya Pradesh, Maharashtra and Rajasthan for stealing cars.
Joint Commissioner of Police, Crime, Ravindra Yadav said, “With his arrest eight cases of motor vehicle theft have been worked out.”
The matter came to the notice of crime branch on August 26, after one Arjun Garg complained that his car was stolen from the drive way of Holiday Inn, Aerocity. He said he had given the keys to the valet parking attendant but when he came out of the hotel after dinner, he was surprised to find the keys missing from the valet parking desk. When he asked around, he was told that someone had taken away his Audi Q7 car. On checking CCTV footage, one person was seen talking on the mobile phone near the valet parking desk and taking away the key of the car. On the complaint, a case was registered and teams formed to trace the man.
During investigation, it was found that there had been several cases of theft of high end luxurious cars using the same modus operandi in several metro cities including Gurgaon, Pune and Mumbai. The dedicated teams studied all cases and zeroed down on the prime suspect.

On September 12, the police received a specific information that SatendraSatendra Singh Shekhawat would come near Hyaat Regency Hotel to steal cars. A trap was laid and an Audi car with Maharashtra registration number was intercepted. Singh was questioned and apprehended. During checking, the Audi Q7 was found to be stolen from Holiday Inn hotel.
Shekhawat was then interrogated at length. “During questioning it was revealed that he was a known interstate criminal and had earlier been arrested by the police of Madhya Pradesh, Maharashtra and Rajasthan in several cases of theft, robbery and assault. In February, 2016 he came out from Jodhpur jail and again started stealing high end vehicles,” Yadav said.
He added, “He stole vehicles in such a simple way that nobody could suspect him to be a thief. He would come very nicely dressed and approach the keys stand of a valet parking. For those managing the valet parking area,he would seem like an ordinary businessman talking on his mobile
phone. He would wait for an opportune moment and as soon he got one, he would just remove one key from the key stand and would drive off with his catch of high end cars.”
During interrogation, he revealed that he disposed off the stolen vehicles to his trustworthy receivers who would in turn use these vehicles to transport narcotic substances from Rajasthan and Madhya Pradesh to their desired destinations.
You must log in or register to reply here.
Similar threads
This Woman Stole A 4-Day-Old Baby From A Bengaluru Hospital,
Hackers Stole User Data From Sony Again
Share:
Facebook Twitter Pinterest WhatsApp Link
Top