A Couple of Kids Made a Fake 'Tinder for Fighting' App, and the Internet Fell for It 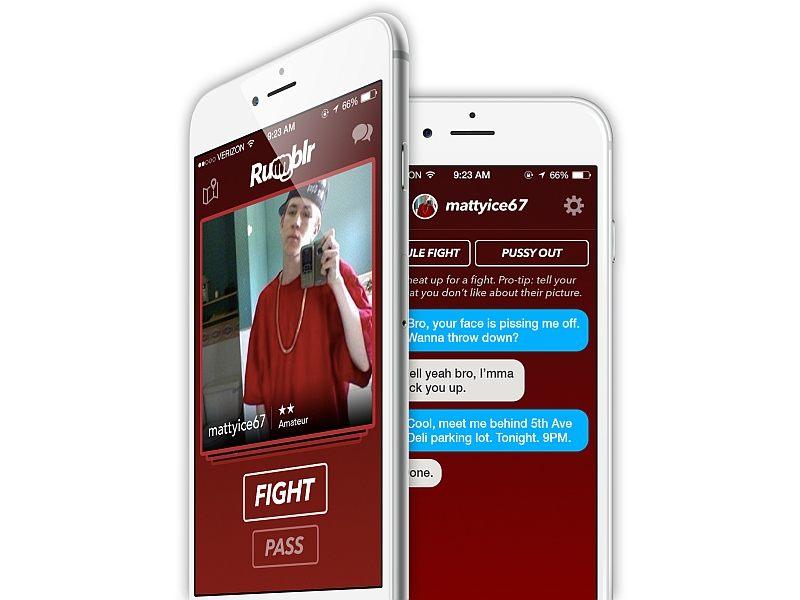 Rumblr, the "Tinder for fighting," promises to bring fight club straight to your smartphone screen. When the app was due to launch at 5pm EST Sunday (3.30am IST Monday), its founders promise, it will let users schedule consensual, recreational fights with local strangers for free.

The app has been covered by the likes of Venture Beat, Business Insider and New York magazine. The New York Daily News reported Sunday that private investors were lining up to fund it.

There's only one problem with the Rumblr hype: There's no way that the app is real. In fact, it looks far more likely that we are being trolled by a couple of precocious teenagers.

Let's start with the app's most obvious problem: its questionable legality. "Rumblr Inc." is headquartered in New York, where street fighting can be prosecuted as disorderly conduct - at the very least.

See, New York state law explicitly allows for certain types of organized, consensual fighting - as in boxing or karate. That means that, if you're in a high school wrestling tournament and your opponent is killed in some freak accident, you are not criminally responsible for that. And if someone breaks into your home and you fight them back, you're also not responsible for their injuries: You can claim self-defence.

But multiple criminal attorneys consulted by The Washington Post say that is not the case when it comes to street fights in New York, which aren't recognized by law. If you're "throwing down" and seriously injure your opponent - or, God forbid, he dies - you cannot claim self-defence and you could be charged with crimes ranging from misdemeanour assault to homicide.

In that scenario, Rumblr also could be criminally liable, said Peter Tilem, a New York-based lawyer and former senior prosecutor in the Manhattan district attorney's office. If Rumblr's creators are found to have encouraged or aided an assault, they could be guilty of criminal facilitation in the fourth degree - a class A misdemeanour. They could certainly be sued in civil court by injured users or their families.

"Under New York State law, it's extremely problematic," Tilem said. In other words, it's unlikely that anyone would line up to fund such an app, even if two start-up types were oblivious enough to create it.

Speaking of start-up types, the pair behind Rumblr raise a few suspicions themselves. Getrumblr.com is registered to Jack Kim, a skinny National Merit Scholar whose LinkedIn profile describes him as a junior at Stanford. Matt Henderson, meanwhile, owns a nascent online marketing firm called Juhasz & Associates and has purportedly logged a number of fancy-sounding Coursera classes since graduating from high school ... five months ago. Both describe themselves as "lifelong recreational fighters," which - given their ages and physiques (!) - seems improbable.

Kim and Henderson, alas, would not discuss these matters with The Post. In an email, they insisted that the app was real and would be delivered at 5pm, on schedule. However, it is Tuesday now, and the duo has not yet done so - at least for iOS. The website reads, "Due to heavy demand, Rumblr will be released as a beta web application." A dummy app, with fake responses can be found at app.getrumblr.com.
Our bet? Rumblr is a marketing stunt, a prank or (best case!) an unsubtle parody. Part of me is scared it will turn out to be real, of course. Not for my sake, but for humanity's.
You must log in or register to reply here.
Similar threads
WOL3D ITouch 3D Pen for 3D Drawing - Kids will love it!
Kid Friendly Browser and Coloring Book
Xiaomi made a pair of sub-$30 true wireless earbuds
Fortnite on Mobile Made 5 Times More Revenue Than PUBG With Half the Downloads: Report
This car is made up of Lego bricks and runs on Air
Share:
Facebook Twitter Pinterest WhatsApp Link
Top