6 Years After The Attack, Delhi HC Let Off The Accused Who Poured Acid On Her 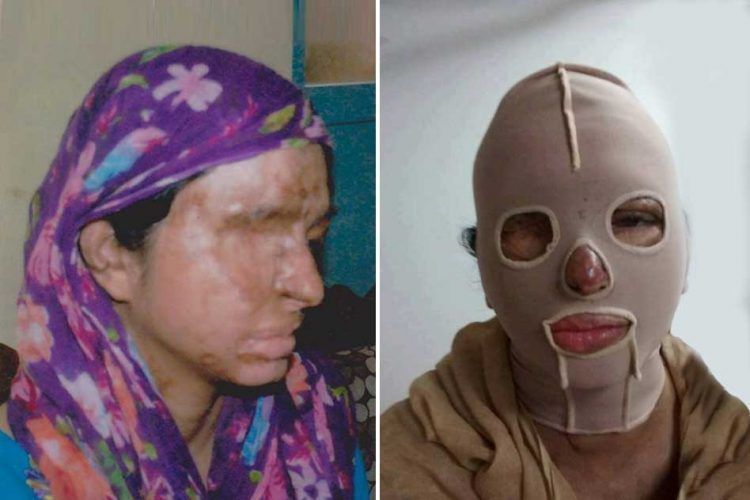 The cruellest way to maim an individual is to attack them with acid. The attacker targets the face of the victim to disfigure and blind them. In India, the maximum numbers of victims of acid attacks are women and children, and sadly, the number is on the rise. Acid has a distressing and upsetting effect as it is not only a physical attack; it creates social, emotional, and mental scars along with the physical. The victim isn’t only physically distressed, but also feels socially stigmatised.

Despite these horrific attacks, there are many people who are not shying away from coming out in the open to share their stories. They believe that their stories will make others aware. One such story is of Sheela, who was allegedly attacked on her way to home from work on 19th November 2009.

Sheela hails from Delhi and belongs to a simple middle-class family where women were not allowed to go out of the house often. But she was ambitious. Due to personal reasons and to get a better job and life she went to Panipat in 2007. Her friend suggested a student counsellor position to which she applied and got selected. She also enrolled for an MBA from the same institute.

Her boss, Yashwinder Mallik started getting friendly with her. But she wouldn’t reciprocate as she was an introvert by nature and wanted to concentrate on her work. But his fascination with her did not wane. He became obsessed with her to the point of wanting to find out who she spoke with on the phone. Sheela was upset with this behaviour and wanted to leave the job. But he blackmailed her by slitting his wrist. He left no stone unturned to blackmail her. He even allegedly physically assaulted her.

When she told him about quitting, he hit himself on the head with an iron road. Sheela was scared to see him bleed and his crazy behaviour. He also threatened her with power and spoke about the police and political leaders he knew and made her stay.

Sheela saw that Yashwinder’s wife also knew of the issue and was distressed about it. She requested his wife to convince him to let her go. But he denied letting Sheela go at any cost. He told openly about his feelings for Sheela.

Afraid, Sheela used to stay back at home. But, her boss would force her out of the house. He threatened her that she had to work with him if she wanted to stay in the city. She managed to find another job in another institution. But, Yashwinder brought two of his friends and created a ruckus at the new workplace in front of everyone. One day, he forced her to meet him and kidnapped her for an entire day. He hit her at times, and at times started crying himself. She realised then that he would not let her live in peace. She reluctantly agreed to go back to her former workplace.

In 2009, Yashwinder tried to allegedly molest Sheela. This was the last straw. She decided to quit. Yashwinder agreed and asked her to serve the notice period, which ended on 1 December 2009. On November 19, as she was leaving, she saw a boy standing at the bottom of the stairs with his face half covered. She wanted to see who it was and glanced towards him. Before she could realise what happened, she saw green liquid thrown at her face. Her first reaction was to think it was a prank by a student. But the moment the liquid made contact with her skin, she knew it was acid.

She was in so much shock that it did not occur to her to wipe the acid off. She ran towards the closest room which was Yashwinder’s brother Rupak’s. Nobody came forward to help. Rupak called Yashwinder, and the two of them took her to the hospital within an hour.

When they informed her family, her brother wanted her to be brought to AIIMS, New Delhi. But, Yashwinder forcibly took her to CGI Hospital, Rohtak. Her family finally reached and took her to Apollo Hospital in Delhi.

Her lips were burnt, her face swollen; she had deep burns on her chest and could not blink either. When the police arrived, they asked if she knew the culprit. Even though she was in tremendous pain, she managed to convey to them that she could recognise him.

Yashwinder visited the ICU and threatened her with dire consequences if she mentioned his name, all while her brother was right there. When the police came, Sheela was scared to say Yashwinder’s name but did mention that it was someone from her office. But the police wrote down that she did not have any suspects in mind and did not file the FIR.

Sheela’s family was becoming suspicious of Yashwinder’s motives and his visits and changed the hospitals a few times. But somehow he managed to find them. They finally shifted her to AIIMS Dehradun. He found them there too, but they refused to let him meet her. Sheela felt safe with her family.

On 1 January 2010, she called and lodged another complaint with the police and mentioned Yashwinder’s wife as the suspect. She knew that his wife was jealous of Yashwinder’s obsession with Sheela. But the police didn’t respond to her, and she wondered if she would get justice in her life.

Sheela was looking for support from women’s organisations. She needed mental and financial help. Her surgeries and medical expenses bankrupted her family and even to this day, she spends about Rs 4,000 a month on an average. Through her distressed time, she found a ray of hope in the form of the helpline number 181. This was launched after the Nirbhaya gangrape case in 2012. Sheela approached the helpline in May 2013.

She met Khadija Farooqui, head of the helpline. Since the case was not from Delhi, Khadija helped Sheela send a letter to the Chief Minister of Haryana for aid. But this application was rejected saying the attack took place before 2012. But Sheela did not give up. She lodged another application and attached her before-and-after photos along with it. Her request was approved and sent to the Chief Judicial Magistrate (CJM) of Haryana, Parminder Kaur.

The next day, Sheela received a call from the CJM. Then she asked Sheela whether she knew who attacked her. Sheela felt relieved as someone was finally asking her this question after four years. Sheela broke down and said that she suspected Yashwinder’s wife. She added that the police could have arrested her but didn’t do as her boss was politically influential.

In 2013, Sheela revisited Panipat and showed the places where she was accosted, stalked and attacked by Yashwinder. She was accompanied by the supervisor of 181 for recording the statements. Yashwinder was called to the DSP’s office where he said that Sheela was making allegations for money. After a thorough investigation, the police found that the attack was planned by Yashwinder’s wife. To harm Sheela, she required Rs 1.5 lakh which she could not arrange. So she employed the help of a student for Rs 40,000. He told his cousin to throw acid on Sheela. With pressure from the CJM, the police arrested everyone involved but added fewer charges to Yashwinder.

The very next day Yashwinder was released on bail. CJM informed Sheela that a political leader visited her and asked about the case. Even Sheela’s lawyer stepped back as he daughter was followed and threatened by unknown people. Yashwinder was released, whereas his wife was remanded to 40 days in jail. The boy who threw acid spent three months in the jail.

Sheela did not have hope for justice in Panipat and filed for a transfer of the case to Delhi on 18 February 2014. The Haryana court issued a stay order on 7 March 2014, but the case was transferred to Rohini, Delhi on 22 August 2014. Judge Deepak Mishra ordered for a daily trial. The Rohini Court pressed multiple charged on Yashwinder for harassment, kidnap, and abuse. His wife and the two students were booked under IPC 326, 308 and 120 D. Since one of them was a juvenile during the attack, his case was transferred to the Juvenile Justice Board.

The case came to High Court appeal in January 2015 for the trial of the additional acid attack charges. Justice S P Garg presided over the case. On 19th July 2016, he listened to the argument. In the meantime, Sheela was being offered crores of rupees as a settlement on the pretext that she will be sent to America for further treatment and if she didn’t comply, they would stretch the cases unnecessarily. But Sheela didn’t relent to their threat. Yashwinder and his wife hired heavyweight and influential lawyers in the High Court and the Sessions Court.
You must log in or register to reply here.
Similar threads
Wallet lost in Mumbai local train returned to man after 14 years
Salman Khan Gets 5-Year Jail Time In 20 Years Old Blackbuck Poaching Case
Punjab News Years on, historic Dukh Bhanjani Beri bears fruit
Daler Mehndi sentenced to 2 years in jail for human trafficking, gets bail immediately
After 71 Transfers in 34 Years, Haryana IAS Officer Retires Without 6 Months' Pay
Share:
Facebook Twitter Pinterest WhatsApp Link
Top