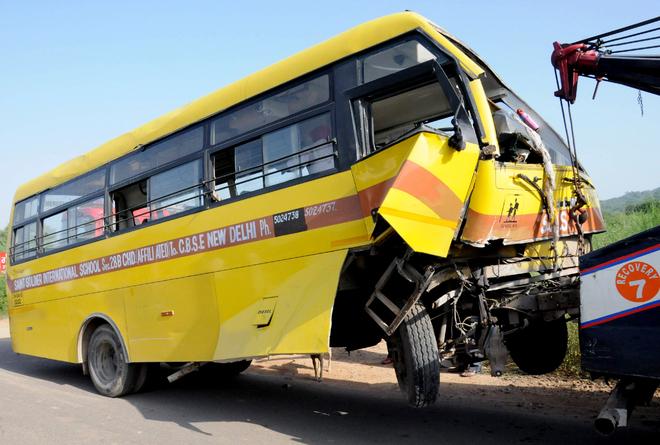 Five students of Saint Soldier International School, Sector 28, were injured after the school bus driver, who was in an inebriated condition, rammed the bus into a bridge near Kaimbwala this morning. The driver was also injured in the mishap.
The bus was on its way to the school after picking up students from Nayagaon when the mishap took place.
At least 12 students, who were travelling by the bus at the time of the accident, had a narrow escape as the bus did not fall from the bridge.
The injured are Shristi (5), Shushank (12), Panab (5), Aditya (8) and Dev Kumar (16). The children suffered injuries on their face.
The Police Control Room was informed about the incident following which PCR vehicles reached the spot. The injured children were taken to Government Multi-Specialty Hospital (GMSH), Sector 16. They were later discharged from the hospital.
Inspector Dalbir Singh, SHO of the Sector 3 police station, said the medical examination of the driver, Gurvinder Singh, confirmed that he was under the influence of liquor.
Nirmal Singh, father of Shristi and Shushank, who were injured in the accident, said it was shocking that the bus driver was drunk in the morning. “Fortunately, all children had a narrow escape,” he said. Ashwani Kumar, father of Panab, said the bus driver was driving recklessly when he came to pick up students at Nayagaon. “It is surprising that nobody checked that the bus driver was drunk. He put the students’ life at risk,” he said.
A police official said the school authorities should take steps to ensure that such incidents were not repeated.
The police have registered a case against the bus driver and the school bus has been impounded.
Villagers come to children’s rescue
Residents of Kaimbwala village rescued the children from the bus and informed the police about the accident.
Student scared
“My son is scared of sitting in a school bus after the accident,” said Ashwani Kumar, a resident of Nayagaon and father of one of the students.
You must log in or register to reply here.
Similar threads
4 students hurt in HPU clash
Driver Killed, 17 Students Hurt In Mishap
Virtual Graduation Ceremony for Indian Students in US
Punjab News Paper ਦੇਣ ਤੋਂ ਬਾਅਦ ਦੋ Students ਸ਼ੱਕੀ ਹਾਲਾਤ 'ਚ ਗਾਇਬ
Punjab News Teachers ਦੇ Transfer ਦੇ ਰੋਸ ਵਜੋਂ Students ਦਾ Protest
Share:
Facebook Twitter Pinterest WhatsApp Link
Top