5 of family killed in Sahnewal mishap 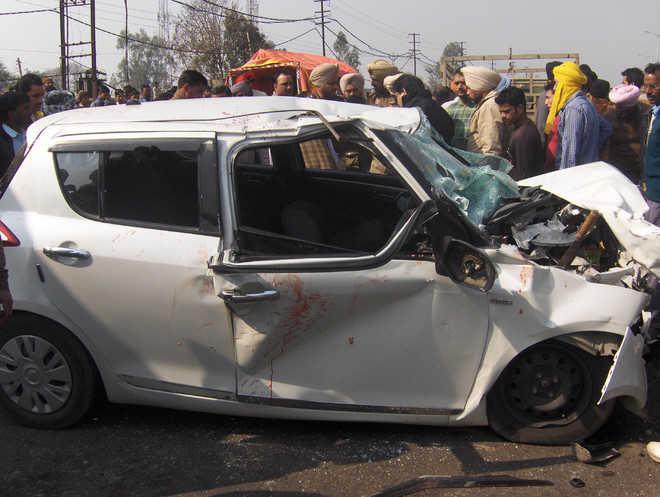 Five occupants of a car, including two women and a child, were killed and a two-and-a-half-year-old boy was injured when their car hit a static trailer on the national highway at Pawa Khagat village near Sahnewal today.
The car, being driven by Rajneesh Kumar, was coming from Salana village near Khanna and heading towards Ludhiana when the accident took place.
Those killed have been identified as Ramesh Kumar (65 years), his wife Veena (60), son Rajneesh Kumar (40), daughter-in-law Rita (35) and Rajneesh’s niece Ginni (6).
The injured 2.5-year-old son of Rajneesh Kumar was admitted to Apollo Hospital, Ludhiana, and is stated to be out of danger.
The family of transporters belonged to Delhi and had reached Salana village last night to offer condolences to their business partner Shingara Singh whose wife Harinder Kaur had passed away last week. They had started from Salana village today to attend the bhog ceremony of one of their relatives at Ludhiana.
Onlookers said that the parking of the trailer on the national highway on the right side without any indicator was a serious lapse on the part of the National Highway Authority of India which claimed that traffic could move on this stretch without any hassle.
SHO, Sahnewal, Hardeep Singh said that the bodies were handed over to the relatives after the post-mortem examination and a case registered under Section 283, 304-A, 427, 337 and 338 of the IPC at Sahnewal police station.
You must log in or register to reply here.
Similar threads
3 of family killed over parking space
4 of family killed in fire after daughter’s midnight birthday party in Delhi
Delhi family killed for Rs 40,000; accused drank, ate at crime scene
Tragedy for Tangdhar family: 2 sons killed in nine months
5 of family killed in accident
Share:
Facebook Twitter Pinterest WhatsApp Link
Top