3 Weeks After Demonetisation, Five Practical, Rational, Effective Steps That Need To Be Ta 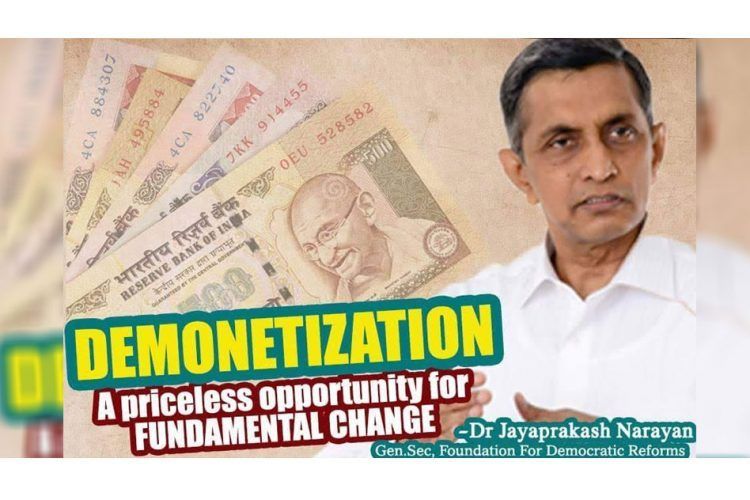 Demonetization is a difficult, massive operation. Now that the government has taken this major initiative , the people are very receptive to all major reforms. Excessive empowerment of tax officials letting loose Inspection Raj and overregulation in license-permit Raj created black money and corruption in the first place. Therefore relying on these methods will be a recipe for disaster.

What then are the practical, rational, effective steps that will radically transform the way citizens look at tax laws, the public servants behave, and government acts? Here are the five doable things along with this massive exercise of demonetization touching the life of almost every citizen.

Taxation without commensurate services is only legal plunder. Our tax rates are comparable to most countries at 30% of top rate. But services people get in return are appallingly bad. Our infrastructure, water, sanitation, storm water drainage, education and healthcare are among the most unreliable and sub-standard in civilized world. On top of this, for almost all basic, paid services citizens are entitled to, people are forced to pay a bribe to avoid delays, repeated visits, harassment, humiliation or denial of services. In most cases, a ration card, birth certificate, income or caste certificate, land records, registration of a sale deed, water connection or power connection cannot be obtained without a bribe.

Immediate enactment and effective enforcement of a Public Service Delivery law which guarantees services in a fixed time, and compensation is paid for every day’s delay will improve citizen satisfaction, give fair returns for taxes paid, and enhance trust between people and government. Considering that it is the poor and middle classes who suffer most from poor service delivery, this step will improve lives for the bulk of the people at no additional cost and will reduce the ubiquitous, day-to-day petty, extortionary corruption.

Considering the appallingly poor quality of basic services provided by government, our tax rates are high. Now that unaccounted money is going to reach the banks, government can safely reduce tax rates in a revenue-neutral manner. Taxation without services cannot be tolerated in a democratic society, and it soon degenerates into legal plunder and extraction under duress. The best way to raise tax, GDP ratio and ensure willing compliance is to reestablish the link between taxes and services. Three measures are vital to ensure willing tax compliance of citizens:

a). An immediate reduction of top rate of income tax in a revenue neutral manner – by say 5%.

b). Fair tax assessment, and non-discretionary application of tax laws so that harassment and corruption of tax officials are a thing of the past.

c). Devolution of resources to local governments – especially in urban areas – where citizens see where their money is going, along with encouragement to raise local taxes based on services and accountability institutions to prevent abuse.

Real estate reform is long overdue. Many honest farmers and salaried middle classes are forced to deal in cash transactions without any benefit to them. Three simple steps by union and states together will eliminate black money in real estate in a revenue-neutral manner.

a). Increase basic valuation of land and property to reflect 75% – 80% of current market price

b). Reduce stamp duty in a revenue neutral manner, so that buyers can show real value and pay fair duties and government does not lost revenue.

c). Reduce capital gains tax from 20% to 10%, which will be revenue neutral as the actual market value will be reflected in the registered sale price. When long term capital gains are not taxed in stock market, it makes no sense to tax 20% of capital gains on urban housing when most often replacement cost is high, urban land values keep rising, and most people invest life’s savings in a house or urban property.

a). Withdraw the unwise amendments proposed in anti-corruption law – they make 3-year prison term mandatory for ordinary citizens compelled to pay bribes for services they are entitled to, and give protection to all bribe takers at all levels from even police investigation into corruption without prior government approval. Instead, grant full immunity to citizens who are forced to pay a bribe for what is their due, and give protection to those public servants who are subjected to vexatious investigations – those related to policy advice and policy formulation at government level, or bona fide decisions taken in compliance with government policy.

b). Compulsory retirement of at least 1000 senior officials with known record of immense corruption and misgovernance. Government has power to retire them after 50 years of age or 25 years of service without assigning any reason. But for this step to be truly effective, government should identify the worst offenders without fear, favour or prejudice, and must be utterly fair, and objective in its decisions. Otherwise, it will only lead to more damage than good.

c). Bring in a law to curb corruption similar to SAFEMA, 1976 intended to curb smuggling and foreign exchange manipulation, and upheld by the Supreme Court in 1988. The SC suggested that such a law should be enacted to curb corruption. In this law, there should be three key provisions – confiscation of all property, including benami properties; mandatory jail term of 15 years or more; and reversal of burden of proof once there is prima facie evidence.

All these steps listed above will help a great deal in curbing black money and corruption. But they cannot be sustained for long unless we stop vote-buying and vast, illegitimate expenditure in elections.

In a cycle of 5 years, nearly Rs.100,000 crore (one trillion or one lakh crore) is spent illegitimately in elections at national, state and local levels. Such a system cannot be sustained without a ten-fold returns to those who are elected to office. That means political corruption of the order of Rs. 10,00,000 cr (ten trillion).

This political corruption is mediated by contracts, licenses, natural resource allocation, interference in rule of law, and most of all transfers, postings and key placements. In return, much of the vast machine of bureaucracy that has paid for transfers, posting and placements and the entrepreneurs who bribed to get licenses, favours, loans or natural resources, have to either indulge in corruption for returns on investment, or suppress revenue and evade taxes to make a profit in a business venture.

We need the following three systemic reforms to alter the incentives for candidates, parties and voters.

a). Proportional Representation in States

The requirement of marginal vote in the winner-take-all first-past-the-post system is at the root of vote buying in our country.In the quest for winning votes, most major contenders for power – candidate and parties – are forced to spend lavishly and buy votes. Vast, unaccounted expenditure has become the necessary entry fee for serious electoral competition. it had become a huge entry barrier, has distorted political competition and incentives in politics, has attracted wrong kind of people and repelled most of the public-spirited citizens, and created a system of corruption, bad governance, cynicism and under-performance.

If we allocate seats in proportion of the share of votes of a party in a state, then marginal vote is not vital; winner does not take all; there is no desperation to buy votes; ethical groups and parties will have voice; consensus becomes necessary in governance; representation is available to all views; and ethical politics and entry of truly public-spirited citizens become assets, not liabilities for parties.

There are various models of such Proportional Representation (PR). But simple, state-based models with a reasonable threshold of vote requirement to prevent excessive fragmentation, and multi-member constituencies to continue link between people and their representative will work best in Indian conditions.Such a PR system is technically easy to introduce – it only requires a change in law.

b). Direct Election in States

Now that there is a vigorous debate about simultaneous elections to Lok Sabha and State Assemblies, the best way to accomplish that goal is election of the head of government in states by the people in a direct election, with clear separation of powers, fixed tenure, term limitations, and the freedom to appoint the cabinet from outside the Assembly. In a large, aggregate election in the whole state, the risks of vast investment in vote buying are too high, and rewards are too low. Therefore leaders and parties will depend on the personality, character, record and credibility of the candidate, and the agenda, rather than on vote-buying. At the same time, as the legislative majority is no longer necessary for the survival and functioning of the executive, the profit making opportunity of the legislator diminishes substantially (he can no longer pressurize government for transfers, contracts and other favours). Therefore, the risk of high investment in vote-buying becomes unsustainable, as the rewards are few. The whole system will go into a virtuous cycle, and black money and corruption will decline significantly.

Well-designed, accountable local governments are where people can see the links between their vote and personal outcomes (very similar to residents’ welfare associations – RWAs), and between taxes and services. Also in empowered local governments authority can be fused with accountability, and there will be clear lines of accountability and no alibis for non-performance or failure. If we allow the local governments to be the real third tier of governments with clear separation of functions listed in the Seventh Schedule, and with a definite share of devolution on par with states through Finance Commission, our democracy will undergo radical transformation and vote buying, black money and corruption will be reduced substantially. We also need strong, independent, empowered local ombudsman, so that the pervasive culture of corruption and mis-governance does not destroy local governments before a virtuous cycle can be established.

All these five fundamental reforms – service delivery, tax rates and administration, real estate, grand collusive corruption and electoral system – are achievable and within reach. The demonetization is a difficult, massive operation. Now that the government has taken this major initiative, the people are very receptive to all these major reforms. All we need are clarity of purpose, a sense of strategy and deep insights into how free societies operate. If these steps are proposed by the government, and the first four easy, popular steps are implemented quickly, the conditions for the major political reform with popular will and broad consensus would be created. Time is of the essence. If this priceless opportunity is squandered by inaction or arbitrary action, we may not recapture the momentum for positive change for a long time.

Last edited: Dec 2, 2016
You must log in or register to reply here.
Similar threads
Supreme Court Allows Mumbai Woman To Abort 24-Week-Old Abnormal Foetus
After the Death Of 82 Civilians Over The Past Week, Evacuation Finally Beings In the Syria
Chapecoense player found out he was to be father a week before crash death
Within A Week Of Demonetisation, Bribe Of Rs 2.9 Lakh Paid In Gujarat With New Rs 2,000 No
Demonetization: Here Are How Things Stand A Week After The Announcement
Share:
Facebook Twitter Pinterest WhatsApp Link
Top