3 Nihangs killed in clash over gurdwara 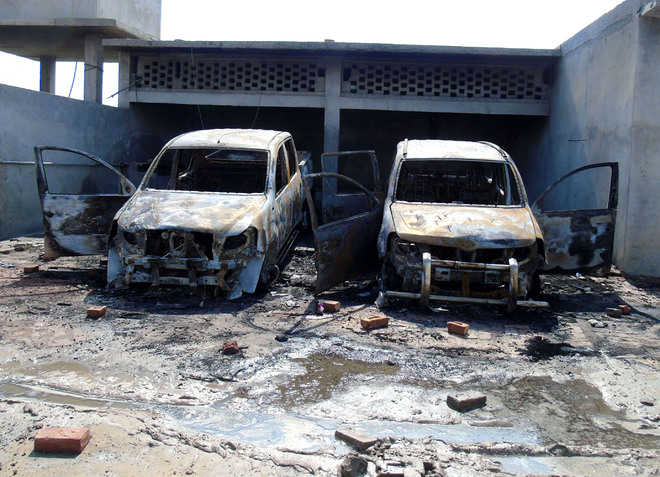 In a clash between two factions of the Shiromani Panth Akali Baba Budha Dal, three Nihangs were killed and seven sustained injuries when they opened fire at each other over the control of a historic gurdwara at Mallan village in Gidderbaha sub-division today.
Those killed were identified as Naib Singh (70) and Harvinder Singh (30), both hailing from Mallan village, and Amritpal Singh (45) from Goluwala village in Rajasthan.
Sources said Balbir Singh, head of Baba Budha Dal, had yesterday handed over a letter to Naib Singh of Mallan village, who was earlier managing the affairs of a gurdwara at Jassi Baghwali in Bathinda district, to take control of Gurdwara Aaramsar Sahib in the village as well.
“Naib Singh along with his followers last night came to the gurdwara to take control from Makhan Singh. The followers of Makhan Singh were fewer at that time, thus they did not retaliate. However, in morning, the Makhan Singh group called more supporters, leading to the bloody clash between the two groups. Makhan Singh had been serving at the gurdwara for the past decade,” said a resident of Mallan village. The sources said a number of shots were fired and sharp-edged weapons were used. Six of the injured were taken to the Civil Hospital at Muktsar. Hospital staff said all had suffered multiple fractures. Three of them sustained bullet injuries, they said.
Gurdeep Singh, an injured, said, “We had the ‘authority’ letter which we showed to Makhan Singh. However, he called his supporters and attacked us. Three persons of our group, including Naib Singh, have been killed.”
Muktsar SSP Gurpreet Singh Gill said: “A case has been registered. Around 70 rounds were fired. ASI Iqbal Singh and three other cops, who were present on the spot, even locked the entrance of the gurdwara. But the attackers entered the shrine by scaling the walls.”
The case has been registered against Pritam Singh, Charanjit Singh, Ranjit Singh, Kala Singh, Sukhwinder Singh, Harpreet Singh, Gurdeep Singh, Charanjit Singh, Jaswant Singh, Satnam Singh, Angrej Singh, Sulakhan Singh and unidentified persons.

this is never good