3 held for firing at gym trainer 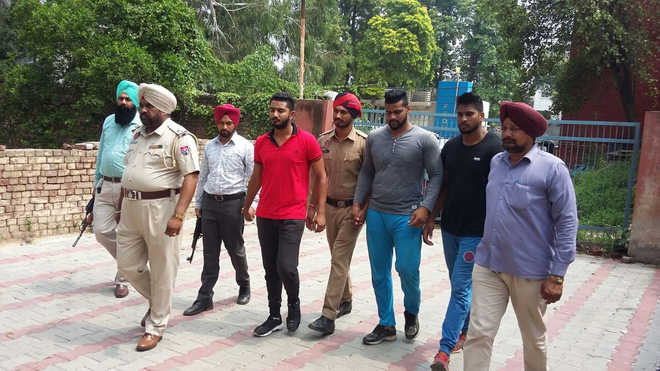 The Mohali CIA wing has arrested three youngsters wanted by the Chandigarh Police in connection with the firing incident at Sector 26, Chandigarh, in which a gym trainer was shot at allegedly by them.
Those arrested are Gagandeep Singh, alias Gagan (22), a resident of Nayagaon, Munish Kumar, alias Mani (23), of Teur village and Gurpreet Singh, alias Guri, of Kokri Kalan village in Moga. They were in a Lancer car at Majri village when the police nabbed them. The police have recovered two pistols of 32 bore, four live cartridges and a Lancer car from their possession.
Mohali SSP Gurpreet Singh Bhullar said during interrogation, they confessed that they had opened fire at Akhil Gir, a trainer at a gym in Sector 26, Chandigarh, with an intention to kill him. “Enmity was the reason behind the crime. The victim was working under Amit Sharma, head of the bouncers, and the latter had abused one of the accused, Mani, over some issue, said the SSP.
The Chandigarh Police have registered a case of attempt to murder against those arrested.
Akhil Gir had received two bullets in his stomach in the incident and was admitted to the PGI, Chandigarh.
Mani worked as a bouncer while Gagan is unemployed. Their third accomplice, Guri, is pursuing a diploma in the electrical trade. Those arrested were produced before the District Courts at Ropar after rega case was registered under Sections 25, 54 and 59 of the Arms Act at the Kurali police station. They have been remanded in one-day police custody.
You must log in or register to reply here.
Similar threads