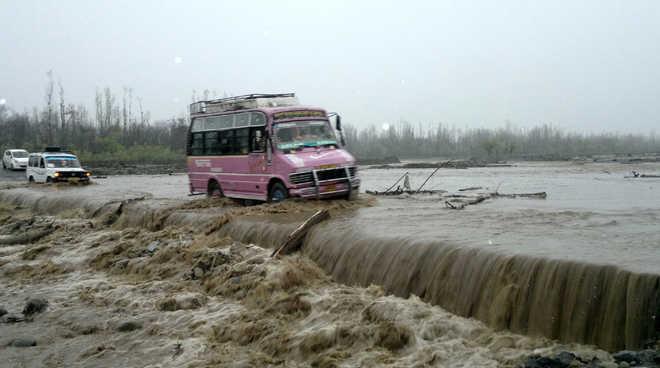 A financing agreement for a World Bank (IDA) assistance of $250 million for the Jhelum and Tawi Flood Recovery Project in Jammu and Kashmir was signed today.
The Finance Ministry said the project would focus on restoring critical infrastructure using best practices on resilient infrastructure. The primary beneficiaries would be the communities in the districts of Jammu and Kashmir affected by loss of public service infrastructure, which will be restored and improved under the project. By strengthening disaster risk management systems and institutions, the project will benefit the entire region affected by floods.
The project will focus on the 20 flood-affected districts — Anantnag, Baramulla, Budgam, Bandipora, Ganderbal, Kupwara, Kulgam, Pulwama, Shopian, Srinagar, Jammu, Samba, Kathua, Reasi, Doda, Kishtwar, Ramban, Poonch, Rajauri and Udhampur, read a World Bank statement.
It said the continuous spell of rains in September 2014 caused Jhelum, Chenab and Tawi rivers and their tributaries and other streams to flow above the danger mark. Owing to the unprecedented heavy rainfall, the catchment areas, particularly low-lying areas, were flooded for more than two weeks. The Jhelum breached its banks at several places. Over a million families were affected, directly or indirectly, and some 300 lives lost. More than 6,48,000 hectares of agricultural and horticultural land was affected, causing a huge loss to crops, plantations and animals.
The objective of the project is to support recovery and increase disaster resilience in the project areas and increase the capacity of the project-implementing entity to respond promptly and effectively to an emergency.
The financing agreement was signed by Raj Kumar, Joint Secretary, Department of Economic Affairs, on behalf of the Central Government and Onno Ruhl, Country Director in India, on behalf of the World Bank.
The J&K government had sought a Rs 44,000-crore relief package from the Centre for rehabilitating the flood victims in the state.
You must log in or register to reply here.
Similar threads