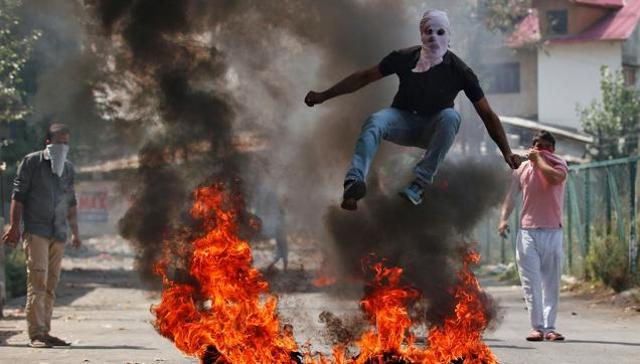 Two people died and scores were injured in clashes across Kashmir after Tuesday morning prayers for Eid as authorities banned gatherings at historic mosques and clamped curfew in all 10 Valley districts for the first time in decades.
Eid celebrations across the Muslim-majority Valley remained subdued with heavy police presence on streets and deserted markets and public spaces.
Thousands of people took out a peaceful march in Srinagar to protest against the two-month-long spell of violence that has left 80 people dead and at least 10,000 injured.
In north Kashmir’s Bandipora, a youth named Murtaza died in clashes with security forces while several people were injured in similar violence in Anantnag. Another protester was killed in clashes in south Kashmir’s Shopian.
Local Kashmiris said for the first time since militancy broke out in 1989, authorities prohibited Eid gatherings at major mosques such as the Jama Masjid and the Hazratbal shrine, and imposed curfew on Eid in all 10 districts of the Valley.
Local people were allowed to congregate only in neighbourhood and small mosques. Residents said festivities were subdued as the curfew made impossible the ritual sacrifice of goats and distribution of meat in neighbourhoods. Businesses reported an 80% drop in sale of meat.
For the first time since the current unrest began in July, authorities suspended broadband internet services by the government-run BSNL. Only postpaid BSNL services are running. Kashmir plunged into unrest on July 8 following the killing of Hizbul Mujahideen commander Burhan Wani.​
You must log in or register to reply here.
Share:
Facebook Twitter Pinterest WhatsApp Share Link
Top